Plot. He owes himself to one of the mafiosos. He cannot return the money, accepting that his girlfriend will perform in various humiliating sexual scenarios according to the creditor's wishes.

"I can not. I'm a doctor. It will ruin my career. I'll pay you a prostitute, ”she argued resolutely.

"They insist on you, someone closest to me."

"Why?" She retorted, half angry and half frightened.

"We will repay them gradually".

"If I don't bring it tomorrow, they'll start with a hammer on my knee."

She said nothing. She just looked at me for a long time. As if delaying the inevitable. I knew my girlfriend would help me.

After 5 minutes of silence, she gave me a lot to eat. "Well, yeah," she finally breathed. Nor did she impose any conditions. I have never felt smaller in my life.

I turned on the camera while streaming the recording on TV to see what we were doing. The face and all the intimate details had to be seen. Another instruction was that the girlfriend had to feel it, not that it was just like. And finally, the scenario the girlfriend will learn only when it is realized. If our performance is worth acting, we'll get 20,000 or a spanking, if we like it, 50,000.

She undressed. I gave her handcuffs on his hands and by the rope he fastened them to the heating. I took fine reprimands and began whipping her up her ass. She clenched her fingers into the windowsill as her ass gradually blushed.

"Aaaach," she yelled painfully for the first time, but only after I pushed hard. I could feel my dick rising.

"No, not on the window, people from the street will see me," she refused to smoke.

I thought I'd be able to stretch her ass, but I had to level her up a bit. I brought stronger tape whip with prickles. As she saw it she began to shout, "No, please, no."

"It doesn't hurt too much, you'll see, I comforted her." It took me a while to flick it. But I had to. She screamed tormentingly and twitched. I hit her again. She screamed loudly again until I wondered what the neighbors were doing.

"So will you start smoking, or should I give you a gag?"

She took him in her mouth so wildly that I was surprised. She swallowed him as far as she could, choking.

"Please stop it," she said, tired. I grabbed her hips firmly and began to push hard and fast. Her sonic expression alternated sighs and groans with deep breaths. I felt sorry for her. I stroked her hair to let her know I loved her. But it also excited me. I drove her butt with great taste. Sometimes I stroked her pussy and clit. Her ass relaxed nicely and matched to both fully-stoked cocks. Her knees buckled. I stepped up the strokes and pounded up to the root spraying her ass. I took out a small dildo and started to put only her erect penis in her ass, although it wasn't very pleasant after the climax. It was good for the visual effect.

I took my cock, kissed her ass, and untied it.

"We have another instruction," I told her after a few days.

"What?" She asked neutrally.

"Take off your clothes," I asked her without answering and turning on the camera.

She began to undress, worried about what was going to happen. She lay on her back and I started licking her pussy. After 5 minutes she was excited and started to sigh.

I said, "Tilt your head over the edge of the bed." She shifted so that she could lean her head over the edge of the bed. I walked around her and started pushing my penis into her mouth. Deeper and deeper. It started smacking. I slowly pushed my acorn against her neck. At the same time, I fed her pussy to get something out of it too and to last more.

She choked. She turned her head on her side and suppressed the gag reflex.

"Not that. That's too deep, ”she shook her head, gasping.

"Please," I said comprehensively, and after a while added, "Spit it on him and pour it on him", then take a deep breath and push him there slowly.

She took it in her mouth and began to sinter it and spit it out until the saliva dripped. Then she turned back and lowered her head over the edge of the bed.

Her pupils expanded as my acorn began to penetrate her throat, but she held. For me it was very pleasant even the feeling of light terror in her face. The last 4cm could not go any further. The neck just didn't physically give it anymore. We trained it for a while, spreading it and massaging her pussy with my fingers and palms as far as I could.

The thrusting of her throat and her pussy made her feel faint. She stopped twitching and was increasingly yielding. Her pussy began to contract orgasically and he slid a little more into the throat of her cock, although something was still missing. He drew his hand and penis. She was trembling.

"I can't," she spilled after five minutes. Red face and forehead twisted with fatigue.

"Eeech," I sighed uncertainly. "Hope it will be enough". I lay down on her and fucked her pussy. I sprayed her belly and turned off the camera.

Boss stood in front of me with a baseball bat. "How did you not get the fuck out of her," he asked angrily. Nothing nice of it. I waited for the wound right away or when it was finished. Instead, he just nodded to the gorilla behind me. I got two in the face and a couple in the stomach. Boss returned to the table with the bat and took the felt-tip pen in his other hand. Make a line on the baseball and hand it to me with the words "A present for your girlfriend", I want to see it in her ass or I have another one for you…. He added with a grin. 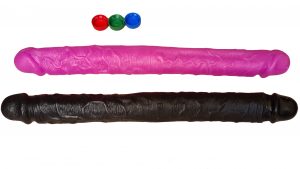